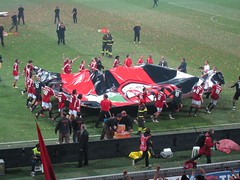 Udinese sealed a Champions League place as a nervy 0-0 draw against champions AC Milan proved enough to secure fourth spot in Serie A while AS Roma claimed the final Europa League place.

The Serie A’s top scorer Antonio Di Natale could have settled the nerves of the Udinese fans, but he missed a penalty with 15 minutes to go, to ensure a tense ending.

Udinese will now play in the qualifying round of Europe’s top competition for only the second time in their history.

Lazio, who had crucially lost 2-1 at Udinese two weeks ago, finished level on points with Udinese after a 4-2 victory at Lecce but miss out on the Champions League on goal difference. They will have to settle for the Europa League next season.

Elsewhere, relegated Sampdoria gave Roma an early shock at the Stadio Olimpico through Daniele Mannini’s goal but skipper Francesco Totti equalised with a low drive and second-half goals from Mirko Vucinic and Marco Borriello secured the three points Roma qualified for the UEFA Europa League along with their city neighbours.

Juventus, who yesterday announced the departure of coach Luigi Delneri, drew 2-2 with third-placed Napoli, while Giampaolo Pazzini scored twice as Inter Milan ended the season with a 3-1 home win against Catania at San Siro.

Finally, it was a day to remember for AS Bari forward Francesco Grandolfo. The 18-year-old forward registered a hat-trick on his first start for the relegated club in a 4-0 triumph at Bologna.