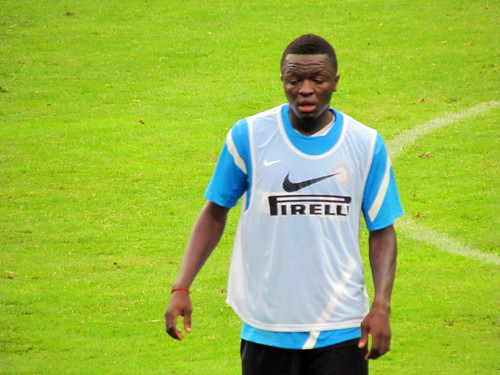 Having not been considered as part of Inter Milan’s important first team player this season, Sulley Muntari reportedly is eager to immediately find a new club which can guarantee more playing times for the Ghanian international.

Aside from considering teams outside of Italy, Muntari’s agent, Marco Odisio, confirmed that Napoli could be the perfect place for his client, as the player would highly evaluate should the Partenopei indeed makes a move for the ex-Udinese player.

“At the moment the player is considering some foreign offers, where he wants to go and play, but Napoli would really be an important alternative. Muntari’s contract is running out at Inter and it would certainly suit Napoli to sign him on a permanent basis,” said Odisio

Although admitting that playing for Napoli would be strongly considered by Muntari, Odisio stressed out that for now there have been no offer from the Southern Italian based outfit, an explanation that squashed recent rumors saying that Partenopei have already made a move for the Ghanian. Should the ex-Sunderland player does move to Naples, he will be following the footsteps of Goran Pandev, another Inter player, who is currently being loaned out to Walter Mazzarri’s team.

“I’ve received nothing official up until now,” Odisio added. “However, it’s certainly nice to hear that a club like Napoli are interested in Muntari. He would certainly positively evaluate such a possibility.

Muntari’s future with the Nerazzurri have actually been under threat since last season, where he was loaned out to EPL side Sunderland for six months and supposedly being sold last summer but things apparently didn’t work out well. Should his situation at Inter isn’t improving there’s a big chance that the midfielder will be departing as soon as this January, although whether his going in a loan deal or permanently sold still remains in the balance considering the difficulty of interested clubs in purchasing the player because of his transfer fee and wages.