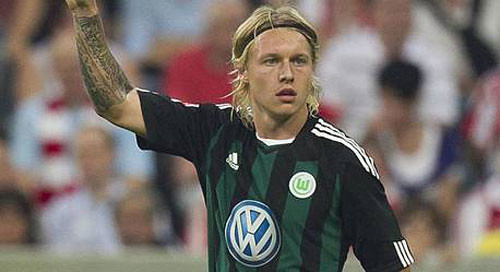 Nearing the final days of the transfer market, As Roma’s player hunt gets busier than ever as after confirming the arrival of former Fiorentina striker, Pablo Osvaldo, the Giallorossi are set to grab another former Serie A gladiator, Simon Kjaer.

The ex-Palermo defender, has confirmed that he is very close in making a return to Italy after having a pretty difficult time in Bundesliga with Wolfsburg, Kjaer spoke to the press that he is very excited in the idea of playing alongside Francesco Totti, Daniele De Rossi and also Juan.

When I heard Sabatini was looking for me, I didn’t hesitate a second. I had the opportunity to play in a great squad with champions like Francesco Totti, Daniele De Rossi and Juan,” said Kjaer.

Reports also revealed that Kjaer has already landed in Roma and is taking some mandatory schedule, such as medical and contract signing before being officially announced as the Giallorossi new signing. The Danish international defender’s arrival in the capital has also been confirmed by the capital club’s director, Sabatini, who is hoping that the contract details for the player can be finished as soon as possible since Roma are really looking to complete their squad before the market ends.

“Kjaer is already in Rome. We have to conclude the deal now and I’ll be very happy when he signs a contract with us,” Sabatini revealed.

Kjaer has been considered as one of the most promising young defenders during his time with Palermo, but it seems the player simply lost a little bit of his touch while playing with Wolfsburg at Bundesliga. Didn’t manage to do well in his two seasons there, a return to Serie A could definitely be the thing he would need to resurrect his career especially under the guidance of young-loving coach such as Enrique, the Danish international could have a first team guaranteed place in the squad.