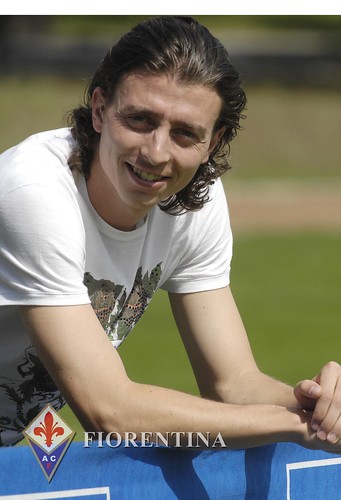 Fiorentina apparently still holds a dream in keeping their midfield star, Riccardo Montolivo at the club despite haven’t been successful in persuading him to sign a contract extension during the transfer market period.

The fact that Montolivo still stays in Florence for at least until January, pretty much opens the Viola’s board confidence in making the midfielder agree to continue his journey with the Florence based side although reports have been emerging stating Ac Milan’s plan in prizing the Italian international when the player’s contract expired in 2012.

Acknowledging the potential of Montolivo leaving for free, Fiorentina are very eager to tie the knot with the 26-years-old midfield man and they feel that the Italian international’s failure to switch club during the transfer window opens the door again for negotiation. The Viola’s general manager, Sandro Mencucci, is very confident that this time they can persuade the former Atalanta youth player to extend his expiring deal and pretty much ends the rumors linking the Italian international with other clubs especially Milan.

“The club have decided to leave the player in peace until after Italy have played their game against Slovenia tomorrow. There will be plenty of time after that to discuss a renewal with him. “I’m optimistic, Even more so when I know that Montolivo and his agent are intelligent people,” Mencucci stated.

Despite of Mencucci’s optimism, there’s definitely a huge sign that Montolivo might really be heading for Milanello soon especially since during the transfer period, the Italian international did rejected other offers coming after Fiorentina refused Milan’s approach. Rumors are claiming that there might have been a verbal agreement made between the Italian international with the Rossoneri’s management, so the player will eventually arrive at San Siro at the very least when his current deal ends.

Although Montolivo recently denied the rumors stating he already made an agreement with Milan, but facts that his agent have been consistently held talks with Milan’s board pretty much increasing the possibilities especially since the Rossoneri are known to prize up talents on free transfer. This summer alone, the Red and Black squad netted two important players, Philippe Mexes and Taye Taiwo on a free transfer rule and apparently also made the same kind of deal with Antonio Nocerino from Palermo, which ended up being bought this summer on a cheap prize because of Mathieu Flamini’s injury.