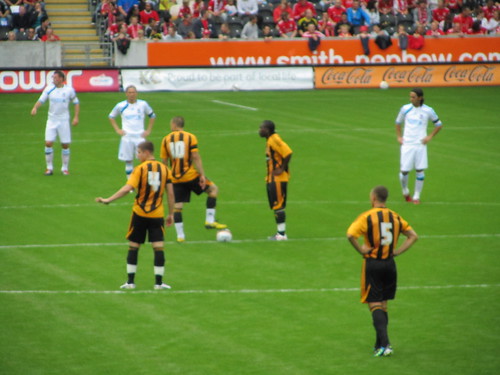 Alberto Aquilani have already made his comeback from injury by coming in from the bench in Ac Milan’s last two games and now he is hoping to get back on the starting line up once his condition is 100% fit.

The Italian international also admitted that he is hoping to eventually get the call up for the upcoming Euro 2012, that’s why regaining his starting spot again for the Rossoneri along with giving the best on the pitch is a must for the ex-As Roma man in order to bolster his Euro chance.

Although admitting his ambition to play at the Euro for Gli Azzurri, Aquilani vowed to Milan fans that he will give all focus for the Rossoneri first before thinking about the national team this summer. The Italian international hopes that by the end of season he can be confirmed as a Red and Black player and also win important titles for Massimiliano Allegri’s side.

Italy and Euro 2012 are always on my mind, but first of all comes Milan and we have many objectives to target from here to the end of the season. At last, I feel good. I immediately felt at home here and as soon as I heard there was a possibility to join the Rossoneri, I immediately said yes. I always hoped for this move,” Aquilani stated.

Explaining more about Milan’s ambition this season, Aquilani revealed the intention to go as far as possible in the Champions League but warned his teammates that taking some opponents lightly is out of the question. The Italian international does admitted that Barcelona and Real Madrid are ahead of other teams in the competition including the Rossoneri, but he said that the Red and Black squad must be ready to face anyone without any complacency.

“Having reached the Champions League quarter-finals, any opponent we get is going to be tough. Barcelona and Real Madrid are perhaps a step above the rest, but in order to get where we want to be, we’ve got to face them all,” the midfielder said to Milan Channel.

Having already appeared in 22 games with the Rossoneri up till now, Aquilani only need three more matches to activate his buy out clause, which means that his officially a red and black player as Milan must buy him from Liverpool if he plays 25 games this season. The former Roma man has been an underrated figure on Allegri’s midfield setup as he basically plays as the director on the pitch, something that was felt missing in the Scudetto holder’s defeat against Arsenal in London not long ago.